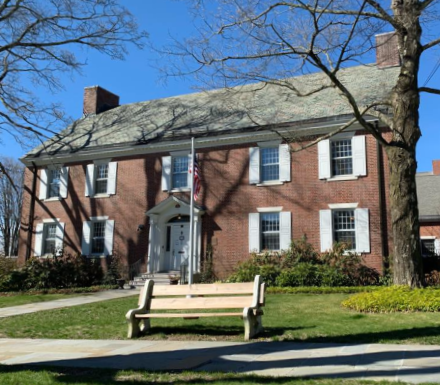 The Cyrenius H. Booth Library was a posthumous gift of Newtown’s benefactress, Mary Elizabeth Hawley. It was named after her maternal grandfather who served as a physician in Newtown for fifty years, between 1820 and his death in 1871.

The library was opened on December 17, 1932 with a capacity for 25,000 volumes. It was considered one of the most modern libraries of its time, containing features which are missing from many libraries even today. It was completely fire proof and its rooms were constructed with cork floors and acoustic ceiling tiles to deaden sound. The building also had a built-in humidifying unit and a centralized vacuum cleaner. The architect for this building was Philip Sutherland who also designed the Edmond Town Hall in Newtown.

Miss Hawley, in addition to donating money with which to construct the building, left a quarter of a million dollar trust fund which was to generate operating revenues from the interest it earned. Until the early 1980s the taxpayers of Newtown paid nothing for the library.

In the summer of 1996, the library began construction of an addition to the rear of the old building that would double the available floor space. The ribbon-cutting ceremony for the new addition took place January 11, 1998. The expanded space provides areas for meetings as well as displays of art and historical artifacts of Newtown from the library’s extensive collection.