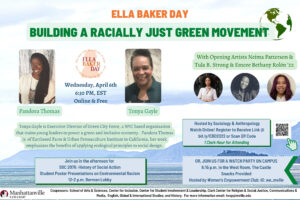 From Wikipedia: Ella Josephine Baker (December 13, 1903 – December 13, 1986) was an African-American civil rights and human rights activist. She was a largely behind-the-scenes organizer whose career spanned more than five decades. In New York City and the South, she worked alongside some of the most noted civil rights leaders of the 20th century.

Baker criticized professionalized, charismatic leadership; she promoted grassroots organizing, radical democracy, and the ability of the oppressed to understand their worlds and advocate for themselves.

The event is free, and registration is required. More information: https://www.eventbrite.com/e/ella-baker-day-building-a-racially-just-green-movement-tickets-301714565387.