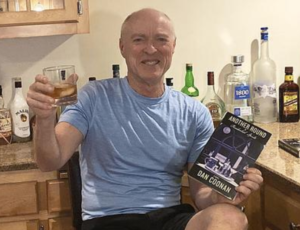 Join us for an evening with Sandy Hook resident, Dan Coonan. Dan is the author of two political thrillers and a self-proclaimed “political junkie.” Learn about the writing and publishing process as well as a breakdown of what just happened in the mid-term elections.

Wednesday, November 9 at 6:00 pm in the Meeting Room

PRESIDENTIAL SPIRITS
A political Field of Dreams. A moderate US president is struggling to lead amidst the country’s
dysfunctional polarization when he stumbles upon a centuries-old saloon where he can drink at a
nightly party with every former president, living or dead. He relishes this escape and the
camaraderie with his new drinking buddies who understand his problems and sympathize with
him. When he realizes that they all want only the best for both him and the country, unlike what
he experiences in Washington each day, he starts to wonder if somehow this saloon can have
greater value. Can he tap into the collective wisdom of Washington, Jefferson, the Roosevelts,
Kennedy, Reagan and all the others to craft a solution to fix the country’s broken and divisive
political dynamic?

ANOTHER ROUND OF PRESIDENTIAL SPIRITS
The sequel to Presidential Spirits.
If you thought the story ended with the McFaddens leaving Washington on Marine One and
Thomas Jefferson stranded in the White House Blue Room, you are sorely mistaken. That was
merely the beginning of the story . . .
In ANOTHER ROUND, Coonan puts us right back in the Presidential Spirits Saloon with a new
political thriller that picks up right where his acclaimed debut novel left off. Coonan’s cast of
memorable and endearing characters return, including all the presidents. Oh, and throw in the
first female Commander in Chief in our nation’s history. Can Danny McFadden and the political
movement he galvanized bring about meaningful change to the country’s political dysfunction?
You’ll love finding out what’s next for McFadden, the Alliance, the country . . . and the Saloon.
You may wish this wasn’t just a charming fictional tale. A country can dream, can’t it?

Registration is appreciated. Signed copies of the books will be for sale and Dan has generously agreed to donate the profit to the C.H. Booth Library.